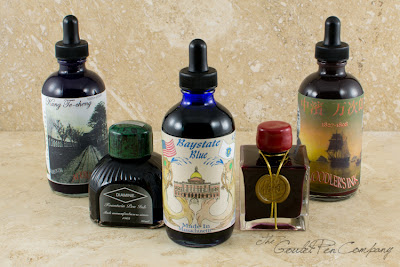 Back in January, we asked you what you wanted to have for March’s Ink Drop, and we called it ‘Mysterious March’. The idea was that you would get to vote for the colors you wanted for March’s Drop! The votes came in, and we brought you what you wanted (with a couple of surprises!). Every voter was allowed 5 selections, just like an Ink Drop would have. With a list of just under 300 inks to choose from, we were a little worried about having something like a 30-way tie, but that was not the case. We compiled them all and found that there were some very clear front-runners.
Here are the top 10 inks chosen, with the percentage representing how many people out of everyone who voted selected that particular ink:
23% – Noodler’s Baystate Blue
11% – J. Herbin Rouge Hematite (1670)
11% – Noodler’s Black Swan in Australian Roses
10% – Diamine Red Dragon
9% – Caran d’Ache Saffron
9% – Diamine Oxblood
8% – Noodler’s Blue Ghost
8% – Caran d’Ache Grand Canyon
8% – Caran d’Ache Storm
8% – Caran d’Ache Caribbean Sea
Here are the inks we selected for Mysterious March: 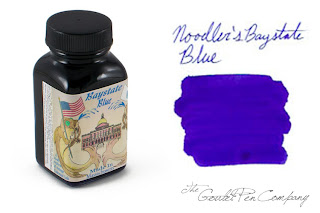 #1 – Noodler’s Baystate Blue
Baystate Blue stole an overwhelming 23% of the vote – nothing else came even close! This is probably one of Noodler’s most controversial inks, mainly due to the propagation of longstanding myths and rumors about its ‘safety’. Rest assured, we wouldn’t have chosen it unless we thought it was safe to use! We highly recommend thoroughly and frequently cleaning any pens you use with this ink, and do not mix it with other inks. It is suitable to mix with the other Noodler’s Baystate inks (Cape Cod Cranberry and Concord Grape).
The ink is prone to staining some pens, so if you’re uncomfortable using it in a particularly valuable or irreplaceable pen, just don’t. Mostly though, it’s just a little harder than average to clean. It’s very rare this ink causes any permanent damage to a pen (it will stain vintage pen sacs though). If you find it particularly hard to clean out of your pen, try using a 10% ammonia in water solution and it should cut through it. This ink is one that gets a lot of talk because of it’s ‘danger’, but once you see the vibrant color on the paper, we think you’ll see why many people think the risk of staining is worth it. Personally, Rachel and I both love it! Baystate Blue is waterproof, and dries quite fast. It performs well on a variety of papers. If you want to see Nathan demonstrate his ink, click here to go see his video on it. 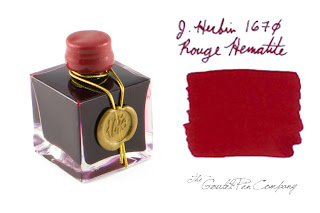 #2 – J. Herbin Rouge Hematite (1670 Anniversary Ink)
Many of you have been asking us to include this one for a while, but we couldn’t get enough of it until now. We were SOOOOO close to not getting this ink in time to use for the Drop, you don’t even know! This one placed second in our poll behind Baystate Blue, with 11% of the vote. 1670 was introduced in 2010 to celebrate J. Herbin’s 340th anniversary, and was so popular that it’s continuing to be made through 2011 and hopefully beyond. This is one of J. Herbin’s more saturated colors, and the bottle is a special design J. Herbin uses only for this ink. 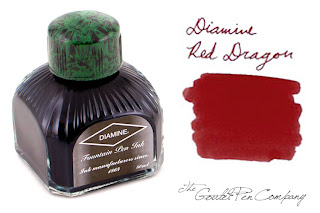 #3 – Diamine Red Dragon
This is one of the ten new inks that Diamine introduced last year and quickly became a big hit. It garnered 10% of the votes in the poll. It came in to the US late last year, and was out of stock from the sole Diamine distributor for about 2 months at the end of 2010, right around Christmastime, it was crazy frustrating! Initial reviews of it were really good but availability of it has been spotty. We’re happy to finally get a good stock of it and formally introduce it to our members. Red Dragon is a really good solid red color and behaves well. Despite the fact it’s very close in color to 1670, it acts quite differently. It is a flat color, which contrasts the intense shading of its Herbin counterpart. 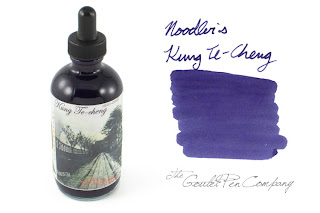 #4 – Noodler’s Kung Te-Cheng
What? This wasn’t even a choice during the vote!!
We know! This ink has been all but unavailable for months, and the buzz and anticipation about bringing this ink back in threads like this one on Fountain Pen Network gave us an indication it’s an ink that a lot of you would love to try, even though it wasn’t on our poll back in January. We didn’t know it would even be available to us until about 2 weeks before the Drop landed, so we kept it a secret and thought it would be a great way to reintroduce the ink to the writing community by putting it in the hands (and pens) of Ink Drop members. We have been inquiring about getting this ink since the day we started carrying Noodler’s, and we’re happy to finally announce we’re going to be an exclusive retailer of this ink, and that it’s going to be available ongoing in a 4.5 ounce bottle with a brush pen, and eyedropper Preppy pen (plus the additional rollerball tip).
This bulletproof ink is an attempt to replicate the color, depth, behavior, properties, and general characteristics of the first royal ink of ancient China. It’s a smooth-flowing ink, with a medium flow. As with the Baystate Blue, we do advise that you take caution when choosing what pen to use with this ink. 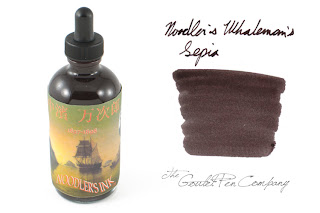 #5 – Noodler’s Manjiro Nakahama Whaleman’s Sepia
This is another color that was previously unavailable that we have now acquired! This is also the first time that this ink is offered in a 4.5oz bottle with free pens (2.5 pens, just like Baystate Blue and Kung Te-Cheng 4.5 ounce). Whaleman’s Sepia is modeled after the whaler’s logbook ink of the 1840s. It starts out as a deep sepia red-brown color, but will turn to red and then purple when bleach is applied.  This ink is also bulletproof. Nathan did a really great video explaining all of the complex meaning behind the development of this ink, click here to go see it.
Honorable Mentions- Black Swan in Australian Roses, Caran d’Ache Saffron
These two inks were contenders for the top 5. Some of you may be wondering why we didn’t simply choose the top five that were voted. The reason is, they simply weren’t available.
Black Swan in particular would have been great to use, but was completely unavailable for about 5 weeks leading up to the drop. It finally came in to us on March 1st, go figure! Our Caran d’Ache distributor only had 7 bottles of Saffron on hand, which is only enough ink to fulfill around 100 member’s Ink Drops, and with over 250 members now it just wasn’t going to work. Even with a month an a half planning for March’s Ink Drop wasn’t enough time to get it.
So with Black Swan and Saffron out of contention, Oxblood was next in line. Going strictly ‘by the votes’ like this, there would have been 3 very similar looking reds: 1670, Red Dragon, and Oxblood. We felt a bit encumbered by this, but wanted to stick to the voters’ choice. We were preparing Oxblood and Blue Ghost (the next two inks in line), but then the opportunity came up for us to include Kung Te-cheng and Whaleman’s Sepia as a surprise and we jumped on it. We chose the top 3 inks voted in order of their availability, and the 4th and 5th were the two ‘born-again’ Noodler’s exclusive inks. We went by our gut instinct that Kung Te-cheng and Whaleman’s Sepia as surprise ‘guest stars’ would be more exciting than Oxblood and Blue Ghost. We’ll leave it up to you to tell us if we made the right choice!
New GPC Swag, With A Dash of Drama
We also added in our new Goulet Pens swag, which includes the infamous Ink Drop sticker you’ve seen before, new business cards, a new GPC sticker and a greatly improved bookmark. We got a lot of great feedback about changes to make with the bookmark, and we listened! It’s now 1.5″ x 7″ (it was previously 2″ x 8″), with rounded corners and a matte finish. We wanted to create a beautiful and functional bookmark and we nailed it (so we hope)!
What was really fun about the swag is that we didn’t get it in until 2pm on March 1st. We had already done up all of the Ink Drops and shipping labels ahead of time, and we had a delivery confirmation that the swag was coming. We were almost literally staring at the clock as the minutes ticked by waiting for it to arrive!! Once it showed up, it was ‘all hands on deck’ to stuff all of the Ink Drops with stickers and bookmarks. My aunt who had good intentions of bringing us lunch that day soon found herself stuffing envelopes with the rest of us as we frantically tried to beat the clock so we could get all of our pre-labeled packages to the Post Office before it closed at 5pm! It was quite hectic, but in a really fun, almost surreal kind of way! That’s just one insight into the kind of fun and drama that goes into the daily operations of our business 😉
Your Thoughts

This month’s theme was by far the toughest for us to coordinate from any of the Drops we’ve done before. I’m really hoping it ends up being worth it! What do you think? 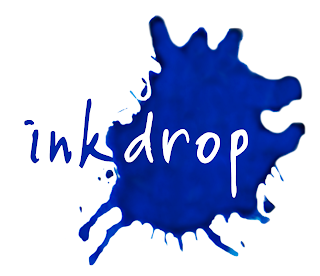